Ever wonder what it’s like to start a new skin care regimen? Ever wonder if what the results of products are worth it? I started on my journey to a fresher, brighter looking skin and journaled my results from Day One to two months later. Here’s what I found. (Warning: some cringe-worthy close-ups follow!) END_OF_DOCUMENT_TOKEN_TO_BE_REPLACED

Sometimes life is about taking leaps when you aren’t sure where you are going to land. But you need to leap because the hamster wheel you are on is only staying in the cage and there’s an opportunity to “go outside”. That’s where I feel I am at right now. And when one of my best friends offered me the opportunity to try something different by joining the Rodan + Fields team, I initially (ok, a few times) put her off. This is not for me. No way. I don’t think I fit the bill. All those thoughts ran through my head. But… there was a but. But, what if? And I couldn’t stop that what if as much as I tried. END_OF_DOCUMENT_TOKEN_TO_BE_REPLACED

Doubt. Doubt plagues me me at every step. Am I good enough? echoes between the hollows of my skull. A relentless mantra that paralyzes. Freezes in time the thought, the action, the urge to try.

Doubt, and its friend delay, are self-realizing prophecies. It would be correct  to say I won’t achieve what I want because I am not good enough, because I won’t – if never try.

And by trying, I practice. And everyone knows practice makes perfect.

Fuck doubt. I got this.

Someone told me recently that Bill Murrary’s character in Groundhog Day (a movie that I could watch over and over) was supposed to have spent 10,000 years repeating the same day. This supposedly is based on a Hindu (?) idea that it takes 10,000 years to perfect a soul. (This could all be verifiable with a simple Google search, but its validity is beside the point for this blog post.)

10,000 years. Of repeating the same damn day. I would go crazy several times over. I literally cannot even imagine how long that is. Poor Bill Murray.

When I was in a young teenager I desperately wanted to be a vampire. So much so that I wore a garnet necklace with a false back around my neck with a note tucked inside that read Dear Vampire – please drink my blood and make me a vampire like you. Thanks! (Or something to that effect.) My desire stemmed less from an urge to drink blood and more from a want to never grow old, to live forever. And to hang out with Tom Cruise and Brad Pitt. I could add Jared Leto but I didn’t realize he was a vampire until very recently. There is no other explanation for his supernatural skin. How can he look the same in his mid-40s as he did when I watched him with angsty googly eyes in middle school. See? Vampire – a day walking one for sure. Has anyone seen him in direct sunlight? I wonder if he sparkles like Edward Cullen…

Anyway I officially take back my request dear vampire. I couldn’t stand eternal life I think. I need deadlines (no pun intended) to drive me forward. If I had all the time in the world what would be the motivation to complete anything? Although, having a body not subject to the whims of gravity would be alright I suppose… But at what cost?

…this is a really weird post. I must stop waking up in the middle of the night to write my blog.

It’s 4:30am. This is the point where I am unable to pretend that I’m not sleeping on thinly veiled brick. My daughter is sleeping peacefully beside me, cocooned in blankets – my husband gave up long ago (he hurt his neck yesterday so he has an excuse). I was awoken this time by both the soreness of my right side and the close sound of a short-legged animal munching in the bushes next to us and then brushing against the side of the tent as it passed. I was too scared to look, but did let out a protective hiss. (All things are scared of snakes, right?)


This wasn’t the first time I was awoken tonight – for the record it’s probably been a collection of twilight sleep broken by sounds of helicopters, cars passing by way too fast, and the conversations of drunk people as they return back to their cars from the scattering of cool bars cropping up in my ‘hood.

(Silence, followed by a low grunt — i imagine HE was looking at his phone but that is just my mind trying to fill in details.)

Her: Yea, but she doesn’t know…

At this point they trail off past hearing distance. Although the topic was somewhat disturbing it does bring me back to one of the reasons I enjoy writing- capturing moments of life and expanding on them. I have a whole short story out of that small window of conversation, at least.

I love observing and listening to the world around me and trying to recapture a bit of life back into the page. Although my back is aching and I’m fairly sure a nap is in my near future perhaps I will let my daughter convince me to go “camping” again — but first I need to get a better barrier between me and the brick. I’ve read a lot of historical/fantasy fiction in my day and have determined that modern day humans (okay, me) have gone soft. 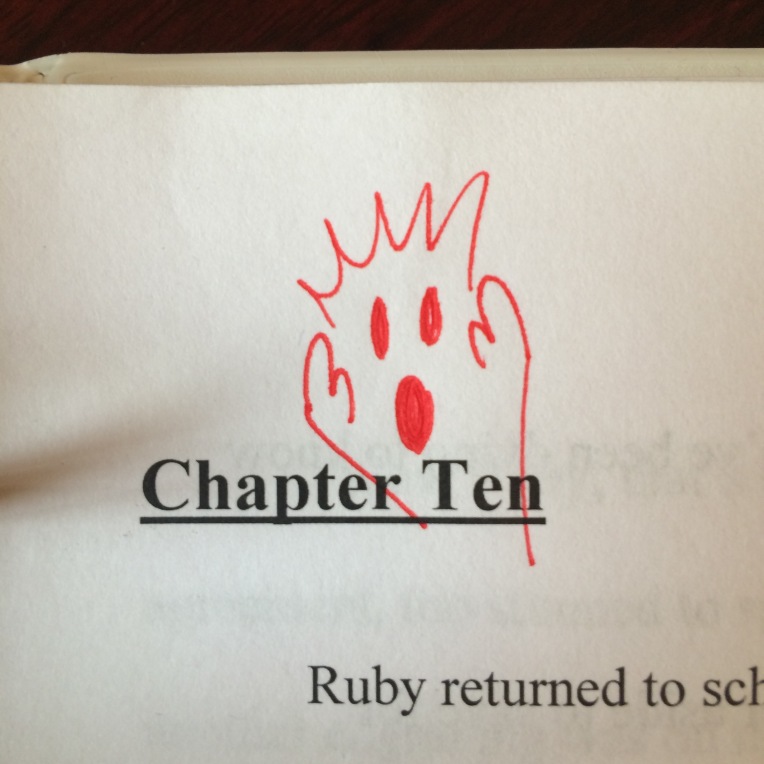 Editing. A necessary step in completing a book. I shudder to think how awful my story would have come out if, after first writing “The End”, I had decided it was well and good to send off. And, I actually have decided that I like editing. I’ve come to visualize the editing process like a painting. A painter begins by first using broad undefined strokes for shading and under painting, adding more details with the next layer, and with the next layer comes even more detail and refinement, until a finished product emerges – one that is hard to imagine started out as blobs of color.

But then I encountered Chapter 10. Feel free to blink absently into space here because that is exactly what I did after reading the chapter to refresh myself and to generally note areas that needed work. What the hell was that? I thought to myself.

Now, to be fair (to myself), Chapter 10 covers two different times, and two different POVs. During my second pass through I decided to edit each story separately without the breaks to help with continuity. So, it wasn’t until now that I read it all together. One of the major issues is that so much stuff happens in this chapter – like three or four major events – but not enough to stand alone on their own. I wanted to keep them together to keep the tension and show how rapidly Ruby’s life is changing at this point, but I don’t think it works.

Other issues I have are just some poorly written-getting close to the end- rushed words. I think I cut scenes that need more exploration, but then I come to the conclusion the book is getting too long. I’m trying to keep around 75k although it keeps creeping up, I think right now there are 78k written.

Anyway, Chapter Ten is a mess and a bear at close to fifty pages long. And nothing is getting done by just sitting here complaining about it. Although wouldn’t that be a dream? “This [insert house/book/what have you] is a mess!l POOF! No mess. “Well, that’s better.”

Or rather “Hello Gray Rain Clouds” – it’s been a while.  And, while I can’t say that I’ve missed you too much, it really is nice to see you here in Southern California again – no matter how temporary.

Progress is happening on the book and starting the website and blog posting has me rejuvenated and I am super motivated to finish. Only three more chapters to finish my third draft and then off to my lucky beta-readers!  It’s interesting to note that although I get a little frustrated with how slloowww this whole writing a book process has been for me (two and a half years) I do realize that every single time I edit, the story gets better.

Anyway, first blog post (yay me! I’m finally joining the blog-o-sphere). I’m going to update when I can, but I’m, well, you know, writing a book and all 🙂 so that’s where I need to keep my focus.  (inner mantra: focus, focus, focus — I wonder what– no, focus, focus…)